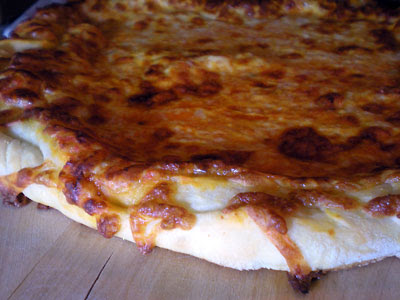 This month's Daring Bakers Challenge, my second, was hand-tossed pizza, a challenge that I was immediately excited to undertake. First of all, I was a little relieved that I wasn't going to be tackling some immensely difficult project on my second venture with the DBs, and second, I just really, really love pizza!

I make pizza an average of once a week. That is not hyperbole; that's the plain, unvarnished truth. We have pizza-and-a-movie night every weekend (my kids aren't old enough to drive yet, so they're a willing ~ and captive ~ audience), and I've tried shaking it up on occasion with "nachos and a movie" or "subs and a movie," but it's not the same. We're a pizza clan.

The pizza I make is Chicago deep-dish style. The crust is pillowy, nearly an inch thick, and loaded with a pound of cheese. (Yes, a pound. But we don't eat much cheese the rest of the week, so it's our weekly dose of cholesterol in one lump serving. Efficient and delicious.) I'd never even attempted hand-tossed pizza, but it's a version that I actually love to eat even more than deep-dish, so I was really pulling for this to work out. I have a baking stone, I borrowed a peel, and I was ready to go.

The dough was a snap to put together. It performed exactly as the recipe said it would. I opted to make three large pizzas instead of six small ones. Next time, I'll make the smaller pizzas because they'll fit on my stone better. I followed the recipe exactly but I made one critical departure: I did not allow the dough to rest for the specified time. This was in no way due to hubris, but rather the fact that I was under the gun and pressed for time. Faced with three balls of pizza dough in the fridge and a hungry family, I decided to press my luck and go ahead and bake them prematurely. 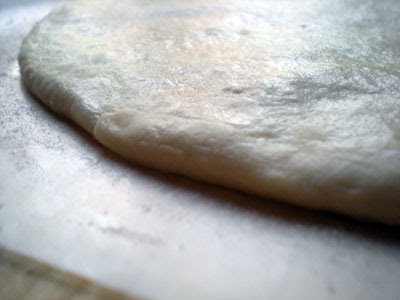 I used 2 balls of dough after only 8 hours of rest time. The result? Fantastic. But they were difficult to toss. The dough was fragile and developed holes where it stretched. As a result, I didn't even try to loft it. I just used the back of my fists to stretch it out, letting the rest of the dough be supported so it wouldn't tear. (The third ball is still in the fridge; I'll bake it off today and see if I can toss that one.) 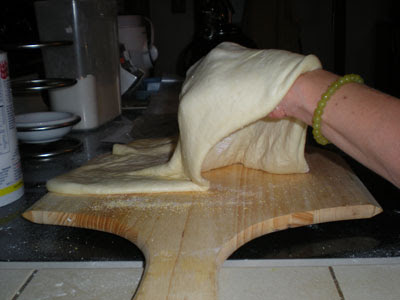 I built up the rim of the crust so it would hold all the cheese I planned to pile on, a trick I learned from a pizza place that was our favorite when we lived in Chicago. This worked well, by the way. The "guard rails" enclosed the sauce and cheese and nothing leaked out all over my oven floor. 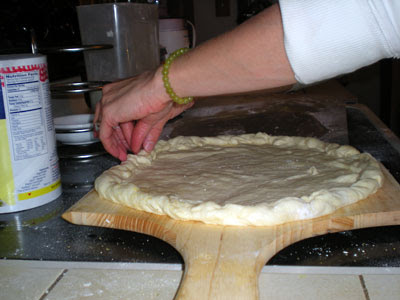 Although I dusted my peel liberally with cornmeal, I had a lot of trouble moving my pizza to the stone. The dough just incorporated the cornmeal and stuck there. I had to dislodge it with a spatula, and even then I was stymied until I hit on the messy but effective idea of folding the pizza in half like a giant calzone, sliding it to the hot stone, then unfolding it and neatening it up a little before putting the whole thing into the oven. (I was intensely grateful that my stone has a rack that enables it to be handled easily, as it was 500 degrees at this point.) 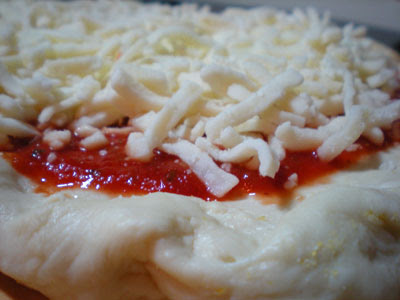 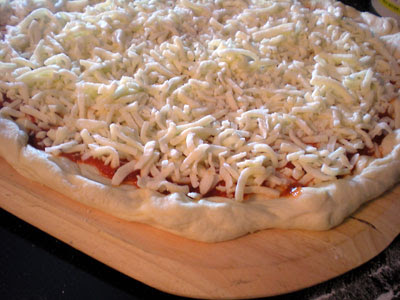 The pizza itself was amazing. It took about 10 minutes to bake, and another 2 to set once I removed it from the oven. It was absolutely delicious, and a pretty good approximation of pizzeria-style pizza, even considering that I baked the dough prematurely and had to manhandle it onto the stone. 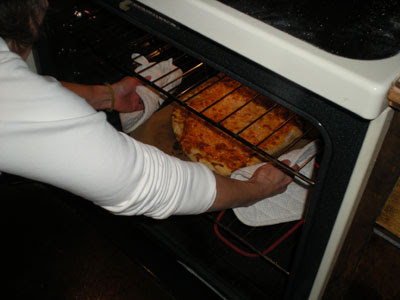 Immediately and without reservation I've decided to put this version into our regular rotation of movie-night pizzas. I plan to do the smaller make-your-own versions, which I think will be easier to handle and have the benefit of allowing me to eat the one thing I love most on a pizza and am almost never able to indulge in on a larger, shared pie: anchovies. 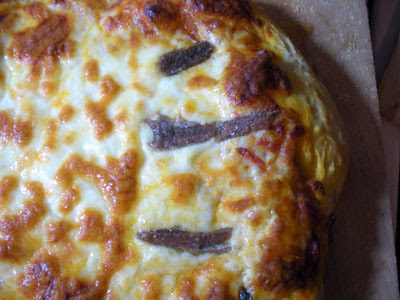 Thank you, Rosa, at Rosa's Yummy Yums, for choosing this challenge! If you want to make this one for yourself, I highly recommend buying Peter Reinhart's book, The Bread Baker's Apprentice, where the recipe appears as "Pizza Napoletana." Or, you can find the recipe here. 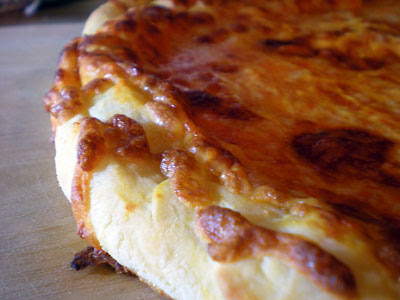 If you like pizza, you'll love this one; I really recommend you give it a go. By all means, toss it if you like, but don't be intimidated away from the recipe it you don't feel up to the challenge ~ it's not absolutely necessary and you'll still produce a truly enjoyable pizza. 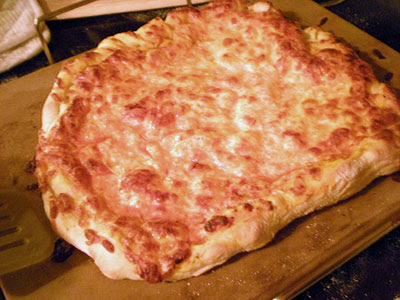