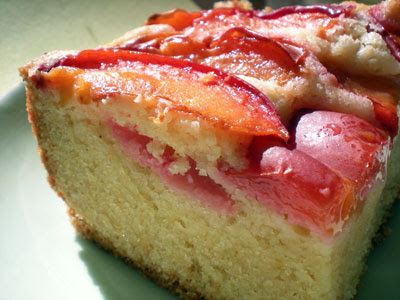 I was so excited to try this recipe, mainly because I had a few pounds of rapidly softening plums on hand, but also because plum cake invariably reminds me of my sweet German grandmother, my oma, turning out great sheet pans of warm, lightly sweet plum kuchen. Every Sunday Oma would make a cake, just in case there were visitors. And in late summer, just before canning season began in earnest, you could count on that cake being ridged with sweet-tart plum slices, sprinkled with coarse sugar, and served with a dollop of whipped cream. 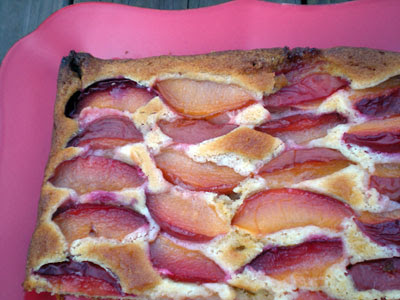 I might never have made this wonderful cake, though, had it not been chosen as a Tuesdays with Dorie selection. (Thank you, Michelle of Bake-en, for choosing this one!) I'll confess that plum cake was never my favorite as a child, and that I was always secretly glad when Oma made her blueberry version. So this was the perfect opportunity to kill a few birds with one stone: satisfy the TWD post for this week, revisit my memories of Oma, use up the plums currently aging in the fridge, and serve my family a culinary snapshot from my childhood. 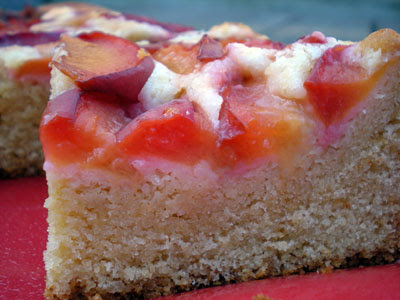 The plums I used for this cake were bright red on the outside - the photo isn't color enhanced - with mellow gold-colored flesh. I didn't have cardamom, so I replaced that with dried ground ginger, because I really like the combination of plum and ginger. Finally, I did not have a fresh orange on hand to zest, so I added orange extract to the batter. I was very pleased with the end result - the cake was perfectly moist and subtly spiced. 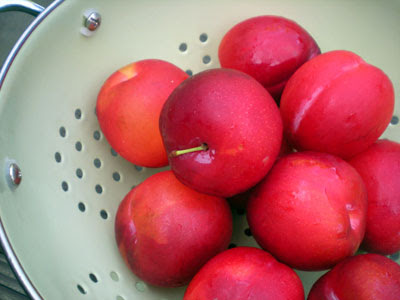 I made one more modification, which you've no doubt already noticed. While I was prepping my workspace to make this recipe, my daughter ambled into the kitchen and pointed to the picture of the Dimply Plum Cake in the Baking: From My Home to Yours

book. "You're not going to make that one, are you?" she asked, looking distinctly uneasy. "Actually, I am. I thought you loved plums," I said. "I do. It's just that they look . . . so . . . so . . ." Here she frowned and trailed off, leaning over to more closely inspect the picture in the book. I walked over to join her. And then I remembered what I had never liked about plum cake when I was a kid. It wasn't the taste. It was the look of those plums, glistening and yellowish, wrinkly, skins dark against the pale crumb of the cake.

I realize that plums and eggplants have a lot in common. Both are aesthetically lovely when raw, both taste delicious when cooked, and both can be downright unappetizing in the latter state. Think, for example, of eggplant parmigiana. Heavenly on the palate, but on the eyes? Not so much. (All those seeds, all that black rind.) And plums, I'm afraid, fare equally poorly, and while a child may be famously good at overlooking physical flaws in his or her loved ones, the same does not hold true for his or her foodstuffs. 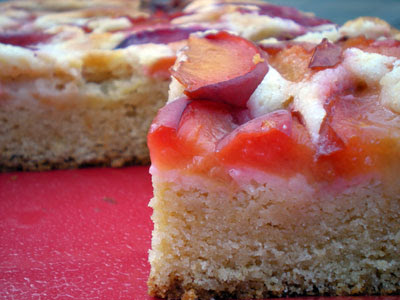 I realize that some may think this violates the "dimpliness" of the cake, but I would disagree. True, we were missing the characteristic dimples of the plum halves, but the slices themselves became quite dimpled as they baked on top of the cake. But better still were the dimples in evidence the next morning when I served this at breakfast. 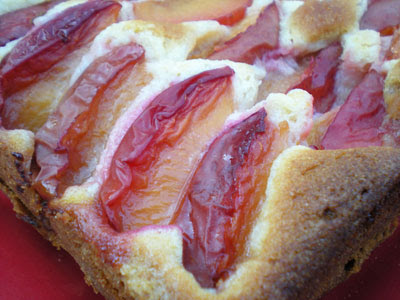 Interested in making this cake for yourself? Check out page 41 of Dorie Greenspan's Baking: From My Home to Yours

. And stop by the Tuesdays with Dorie site to see what my fellow bakers have created!