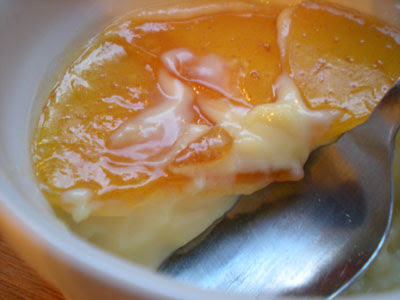 When I read that this week's Tuesdays with Dorie recipe would be Creme Brulee, I was seized with something close to dread. Not only had I never made Creme Brulee before, but I had never even tasted it before. I kid you not. Not a single spoonful of this iconic dessert had, to this point, passed my lips. After an unfortunate flan incident in my childhood, any dessert that consists chiefly of solidified egg yolk (ice cream, of course, being the sole exemption) was no friend of mine. So, no custard, no pots de creme, and no Creme Brulee. 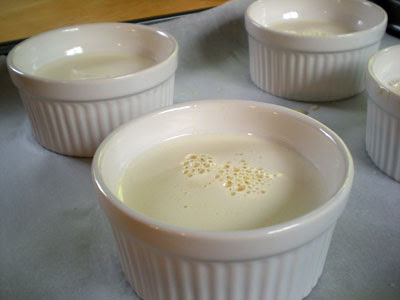 But then there was Dorie. I trust Dorie. Dorie's recipes have never let me down. If Dorie could produce a decent Creme Brulee, maybe it was possible to love egg-based desserts. In any case, my curiousity began to get the better of me, and I was dying to try my hand at it. If I couldn't eat it, at least I'd learn to make it. Everyone else in the world seems to think Creme Brulee is a wonderful idea. It seemed wise to learn how to prepare it.

So, I bought some suitable custard cups, the heavy cream, the eggs. I spent many long moments trying to puzzle out how, exactly, I was going to caramelize the sugar on top. I didn't want to go out and purchase a chef's torch for a dish that might get made approximately once. Ultimately, I decided to go with a standard-issue propane torch, only to learn from my husband that we have no such thing in our household (which probably speaks volumes about how handy we are in the arena of home repairs). I made a mental to borrow a torch from my dad, who not only is an avid all-around handyman and has plenty of torches (I felt certain), but is also a professional chef and could act as my wingman. 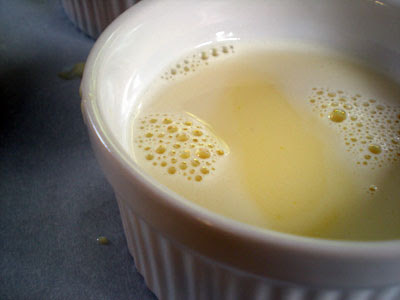 Right before the weekend, as I was all set to make this, my sous chef (read: daughter) spiked a fever of 103.5 and her tonsils camouflaged themselves as Brussels sprouts. All my careful plans were derailed. No way was I going to try the flame-thrower approach to dessert with a child that sick at home. So I found myself making custard last night and thinking - hard - about how to caramelize that topping today and still get it written up and posted by the 11:59 p.m. deadline. 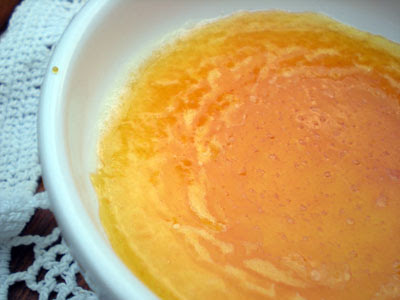 And then I read the TWD message board, and Sweet Charity suggested caramelizing the sugar separately and pouring it over the chilled custard. Brilliant! I'd caramelized sugar that way before, and not too long ago. That was my way out of this quandary; I threw some sugar, water, and a little corn syrup to bind it into a saucepot and cranked up the heat.

Caramelizing sugar on the stovetop may not be as action-packed as toasting a dish of custard with a blowtorch, but it's not for sissies, either. For starters, the sugar is boiling at a temperature of somewhere around 350 degrees F. Like melted plastic, it spins out into long strands when stretched, and if you get it on your skin, it burns until it cools down. (And speaking of melted plastic, the last time I made caramelized sugar this way, my spatula melted and stuck to the side of the saucepot, so I now use only metal or wood utensils when working with melted sugar.)

That said, if you're careful, it's a piece of cake to make your Creme Brulee this way. I combined 1/2 cup granulated sugar, 1 tablespoon light corn syrup, and about 11/2 tablespoons water in a small saucepan over medium-high heat. Stirring constantly, once the sugar has caramelized - turns the color of honey and just begins to smell like a toasted marshmallow - remove it from the heat. Use a small ladle or gravy spoon to scoop about a tablespoon onto the surface of the well-chilled Creme Brulee in the ramekin. Carefully tilt and swirl the ramekin so the melted sugar coats the top of the custard. It will bubble up briefly, then cool into a glassy crust almost immediately. 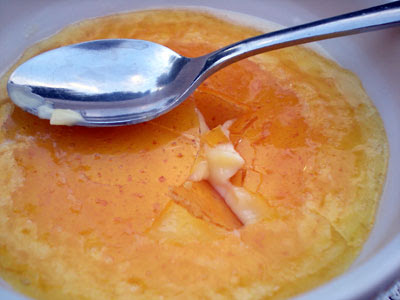 When we sat down as a family to sample the Creme Brulee (I'm comforted by the fact that unlike their mother, my children won't grow to adulthood ignorant of the pleasures of Creme Brulee), I learned that I've been missing out on something really, really, REALLY good all these years. Now I see what all the fuss was about; this stuff is amazing. It's not like flan or custard or pudding. It's different. It's special. As everyone finished and spoons were scraping the bottoms of ramekins, I asked for comments.

"I think you're on to something here, Mom," said my son. "Maybe this can be the dish you start bringing to all those family gatherings." (Hmmm. Creme Brulee for the Super Bowl Party? I'll think about that one.) My husband offered, "It's good. Great. Really great." And my daughter, recovered of her sore throat, spooning up the last little bit, said, "I'm disappointed." "Really? Why?" I asked. 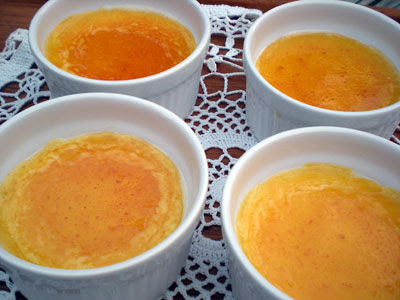 Thanks to Mari of Mevrouw Cupcake for choosing this recipe! I learned a lot from preparing it, most importantly that Creme Brulee and I have a lot of catching up to do.

If you'd like to prepare this one yourself, pick up a copy of Dorie Greenspan's Baking: From My Home to Yours

To see what other TWD members created, check out the blog roll!