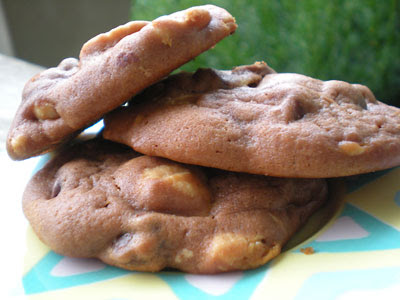 Dorie's Chocolate Malted Whopper Drops
An occupational hazard of being a food writer and cookbook editor is that I frequently find myself smearing expensive and delicate equipment with butter, leaving floury fingerprints where they are least wanted, and making my general mark in chocolate and gently spreading spots of olive oil. As occupational hazards go, it's not a bad one. So what if my mouse is a bit sticky or my keyboard has to be air-blasted of crumbs every few days? My digital camera has smears and smudges everywhere but on the lens - and isn't that what really matters? It's such a small price to pay for getting to write about food, and prepare it, and sample it on a regular basis.

So, as I'm writing this, I've got glass of milk by my mouse hand and a pile of Chocolate Malted Whopper Drops within reach of the other hand. I've got melted Whoppers stuck in my molars, and the prospect of waking up to a container full of freshly baked cookies is giving me the warm fuzzies. 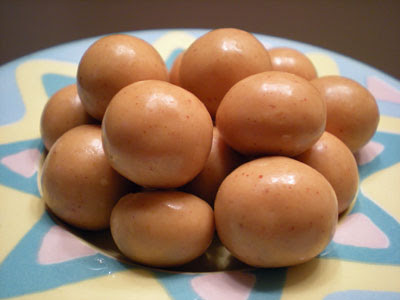 But let's talk about the cookies. To be honest, I didn't know what to expect from these. Malt powder? I've never even had Ovaltine. Whoppers? Okay, sure, but in a cookie? Hmmm. I decided to trust Dorie on this one and ask no questions. I would just make the cookie. 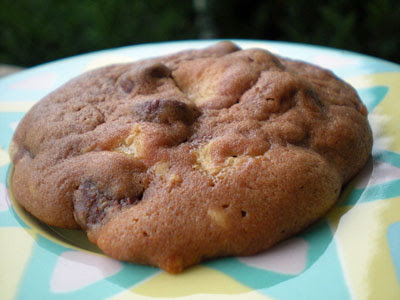 First up was the malt powder issue. I had no idea where to find such a thing, or even that it was still available. (Wasn't malt powder something that school nurses prescribed to bulk up scrawny kids in the 1960s?) I planned on using Ovaltine instead, as that's mentioned as an acceptable substitute. But after reading through a few comments on the TWD Web site, I read that one baker had found malt powder at her local Wal-Mart. I was a little surprised but not completely astounded; my own Wal-Mart carries some interesting products. (Pocky! Palm hearts! Cajeta!) So I checked, and - hot-diggity - it was there! Carnation makes it, and it comes in plain (malt flavor, not vanilla) and chocolate. It's in the hot beverages aisle, snugged up between the Ovaltine and the hot cocoa mixes. 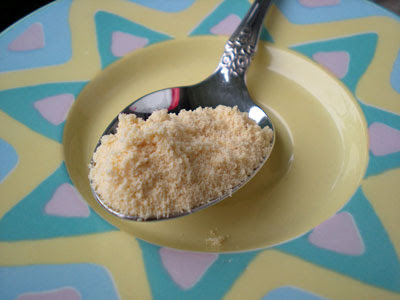 Next, I went after the Whoppers. Here, I decided to depart from the original a little. I chose Peanut Butter Whoppers instead of the regular kind. Nothing against regular Whoppers, it's just that I really, really love the Peanut Butter Whoppers and I thought the flavor contrast would add something interesting to the cookie. I'm so glad I made this choice! The peanut butter coating on the Whoppers added just the right something I was looking for. The cookies retain their chocolate-malt flavor, and the essence of peanut butter is a nice surprise whenever you bite into a chunk of Whopper. 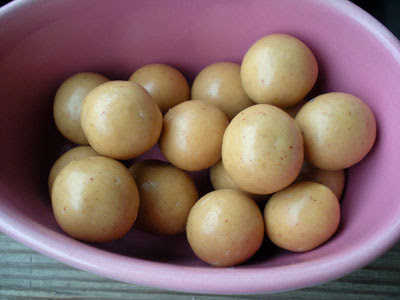 I prepped the dough the afternoon before and baked it off the next day, so it was in the fridge for about 24 hours. I think this helped the dough retain its shape when baked, because the cookies didn't spread much and they stayed nice and dense in the center. I'm not sure how this affected the texture of the end product though, as these cookies seem extremely willing to absorb ambient moisture. In other words, they stay a bit tacky and should be stored between layers of waxed paper to keep them from sticking to each other. Maybe it's the malt powder that produces this effect, but whatever causes it, it's actually not all bad. The cookie stays moist and cakelike, providing a nice matrix for the chocolate chips and crisp-chewy Whopper bits. Another hit from Dorie 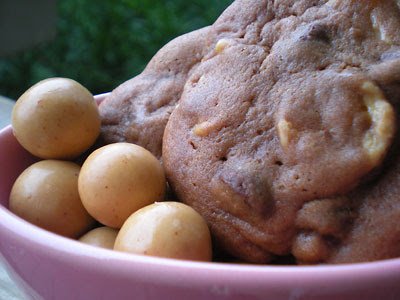 Thanks for choosing this one, Rachel!