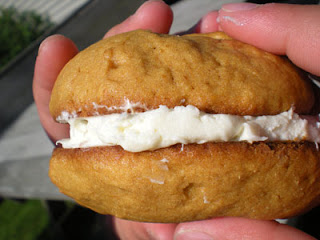 We didn’t exactly set out to make pumpkin whoopie pies. It's July, a day pushing 95 degrees, and pumpkin was the furthest thing from our minds. In fact, my daughter had a recipe for cream-filled lemon sandwich cookies picked out and, lemon lover that I am, I was definitely on board.

But there was that long-lost container of cream cheese frosting I’d found while rearranging my cupboards. Bought ages ago for a reason I could no longer recall, it was within a week of its expiration date and not getting any fresher. So I talked my daughter out of her original baking plans and asked if she would come up with something that would work with cream cheese frosting. Game for the challenge, she pored over a few cookbooks and eventually chose pumpkin. Whoopie pies sounded like a fun summer dessert, more manageable, and less meltable, than cake.

So, while she made up the pumpkin batter, I opened the frosting. And discovered that, ironically, the frosting was a goner. It smelled, and tasted (yes, I did go there), a few significant degrees past stale. Not exactly rancid, but well on its way. Long past usability, at any rate. Out it went.

These whoopie pies are really good. The cake is moist and dense and lightly spiced with ginger and cinnamon. They’re so good, in fact, you can eat these little cakes on their own, without the frosting in the middle - but where’s the fun in that? 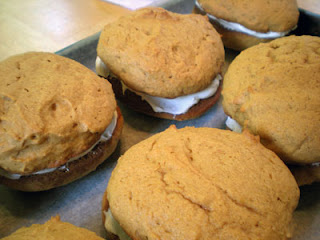 3. Drop by rounded tablespoonfuls or a medium cookie scoop about 2 inches apart onto prepared cookie sheet. Bake at 400 degrees F for about 10 minutes. Let cool on wire rack before filling.

1. Beat Neufchatel or cream cheese and butter together with an electric mixer on medium speed until light and fluffy. Continue beating and gradually add sugar. Add vanilla extract and beat until incorporated. If filling is very loose after beating, chill in refrigerator for 15 minutes before using.