The Joys of (Organic) Plain Yogurt 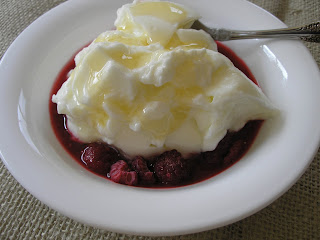 Plain yogurt, like Brussels sprouts, beets, and kale, is one of those foods that makes me feel slightly virtuous each time I eat it. Not because it’s a struggle to choke down these foods, I hasten to clarify, but just because there are so many health benefits associated with them.
Although in the past I’ve purchased store-brand plain nonfat yogurt or that produced by the big-name commercial yogurt manufacturers, I recently decided to experiment with two plain nonfat organic yogurts, both available at my local large-chain store where I shop for groceries.
The two I tried, Brown Cow and Stonyfield Farm, were both available in 6-ounce and 32-ounce sizes. I purchased the latter. I’ll admit that in this day of high and rising dairy prices, it pinched a bit to pay about a dollar more per container for the organic yogurt. (Since then, however, I made a happy discovery. Both brands feature printable coupons on their Web sites.)
Once I tried the yogurts, though, all concerns about the price difference fled. Turns out that there’s no comparison between the store brand and the organics. The latter were far creamier, richer, and did not give off nearly as much liquid as the store brand and even the big-name brand did. But even more dramatic was the flavor difference. Both of the organics were milder, smoother tasting, and much less sour than the others. Tart, yes, it’s yogurt after all, but missing was the acidity that makes eating plain yogurt, even when mixed with fruit or applesauce, sometimes so unpleasant, especially for children. Really, the flavor was a surprise to me, and it has been the biggest factor in my continued purchase of these brands (I tend to alternate between the two, week to week).
Now, I don’t eat my yogurt straight up, out of the container and into the bowl. (I said virtuous, not ascetic!) I layer my plain nonfat organic yogurt on top of about 1/2 cup of frozen unsweetened raspberries or strawberries (it’s still too early for fresh here on the East Coast) that have been microwaved to thaw them so they’re nice and juicy. (If you eschew the nuker, just macerate your berries with 1/2 teaspoon of sugar and let them sit on the countertop, covered, to thaw for half an hour or so.) Drizzle the yogurt with a teaspoon of honey if you like – I do – and fold the berries into the yogurt. Enjoy!
Email Post
Labels: dairy